1st full day of coaching done at The Open 2017 at Royal Birkdale. What a fun fulfilling day working I had at the PGA Swing Zone. The groups included some school kids and police officers who had never hit a golf ball and a guy from my old club of Bootle. I was lucky enough to go into the club house and managed to get a photo of me alongside a painting of my first mentor Mrs Bundy Smith. She was a fab lady who helped me so much in my early days when I was growing up in Lancashire. I was also able to spend some time on the practice ground watching the world famous players going through their practice routines. I also got to talk with one or two of them. I was one happy golf coach. 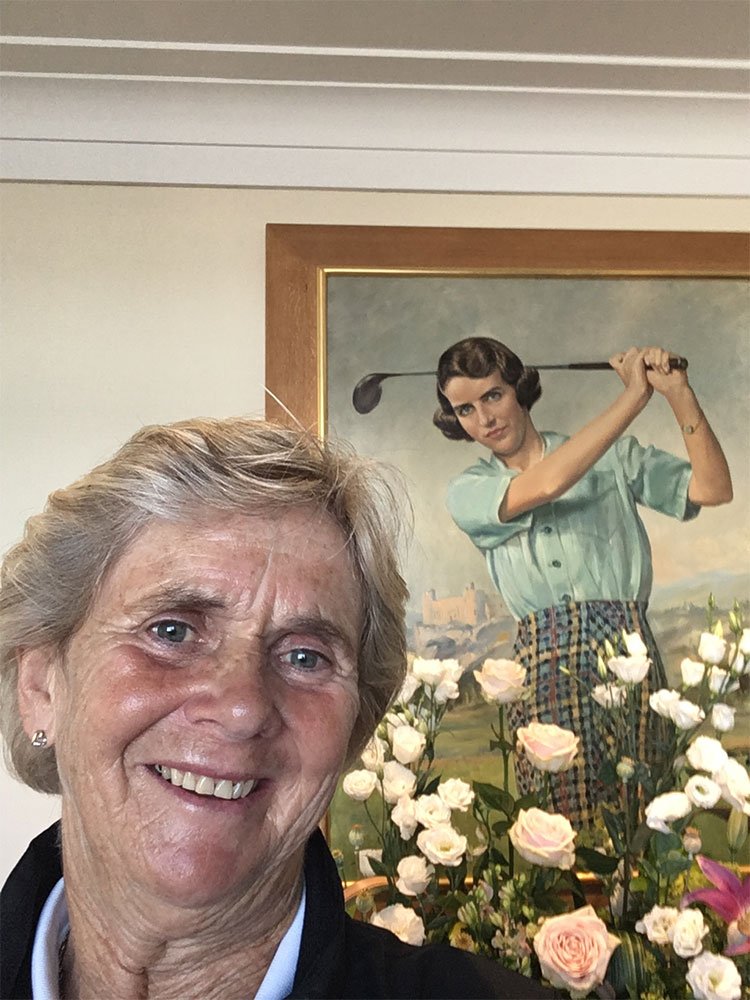 Day 2 is done. It was a warm day but I enjoyed the fun of coaching at the Swing Zone. I started the day with a run which I followed up by catching up with the guys on the Mizuno Tour Truck. I am always fascinated watching Alex Thorn making up clubs for the players. I also spent some time watching the guys warm up on the practice ground with their coaches ensuring they are all “ready to go” on the opening day. As a coach it is very useful for me to see the different approaches and routines the coaches use with their players. Sandy Lyle is a very long time friend and it was great to see him still hitting the ball so well. I find it good fun to watch these great players before going over to the Swing Zone to help amateur players improve their game. The mix of people and abilities is vast and I always enjoy the chance to help – I feel I am so lucky doing what I really enjoy. 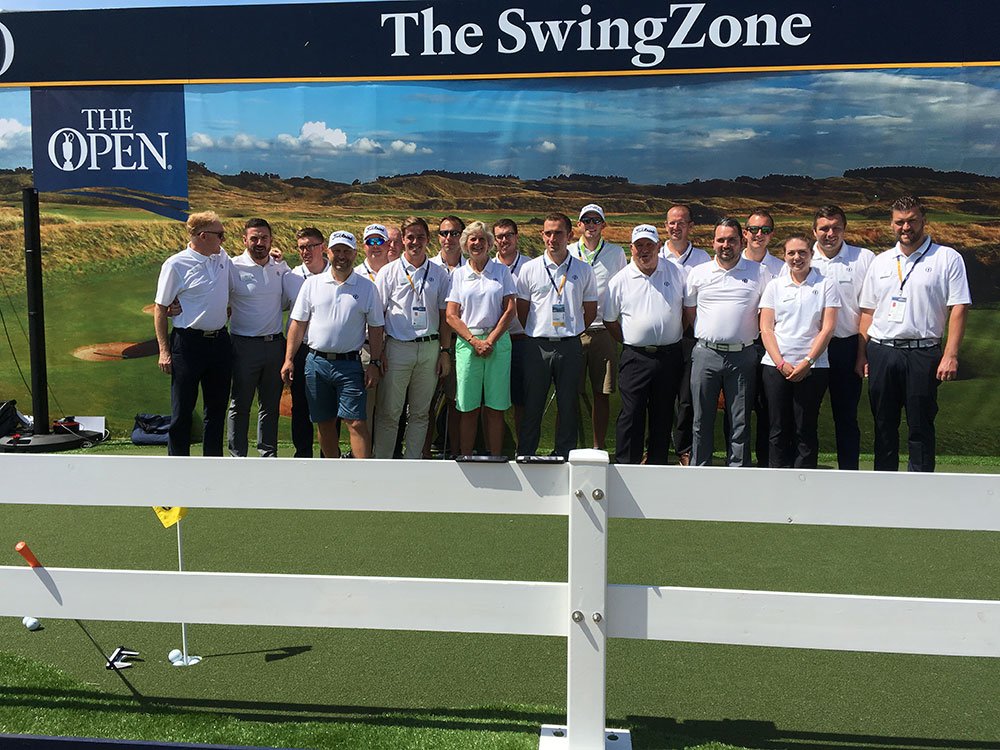 Day 3 is now done and dusted as far as the coaching at the Swing Zone is concerned. Although it is challenging and tiring it is always great fun and I get satisfaction from helping people with their golf. The coaching was a mix of putting, pitching and everything else except bunker play. I also met up with some people with whom I played with way back as a kid, including Paul Dunn, Andy Paine and a guy I worked with outside golf in Place Mate 7 (a one time night club in Manchester – oh my god! how times have changed.) I did get to watch a bit of golf before the storm hit. So it all kicks off tomorrow; the players have done their prep, may the best player win … so who’s your money on. 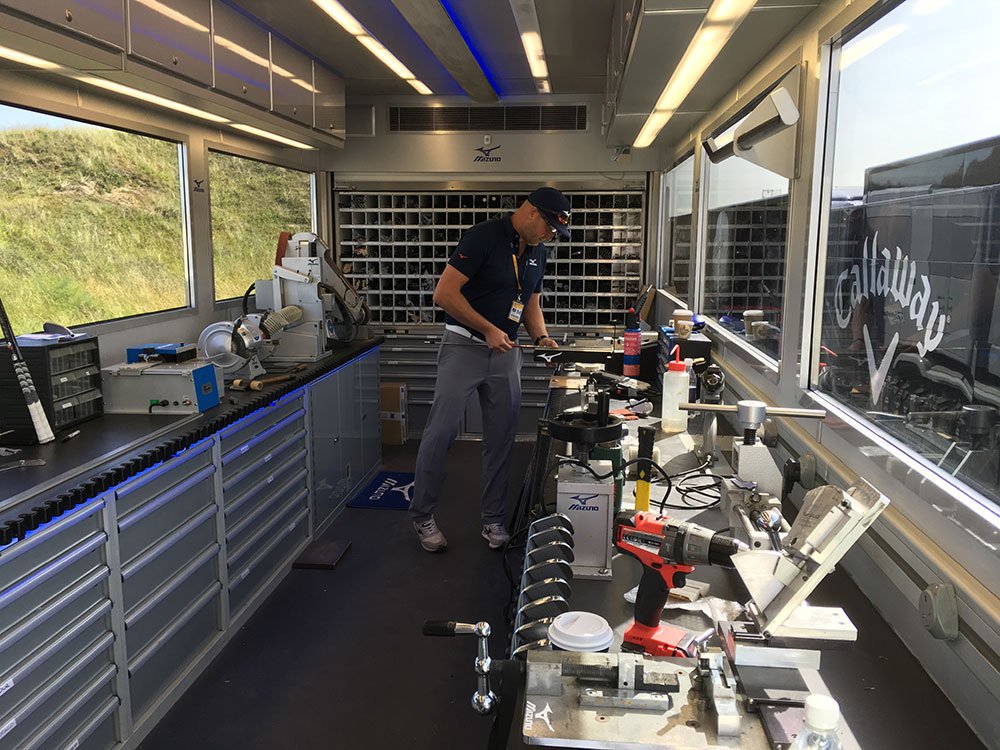 Day 4 at the Swing Zone – OMG how quickly the week is going. Another fabulous day coaching lovely people all wanting help. I love it so much when they say , ” I get it or I see what you mean and I feel so much better”. Of course its hard to make a big difference in 15 minutes but sometimes it’s all we need. So many great stories from my fellow pro’s about the people they have been coaching too. Over the eight days we will cover over 3,000 lessons! It was another fun day catching up with people I played with on tour, including Mike, Claire, Mick and Chris. It really does not seem so long ago but I guess it is. Watching the guys warming up for their round is always special for me and being a bit of a golf junky is like being in heaven for me. Having a chat with the top coach Sean Foley is always a fantastic bonus. 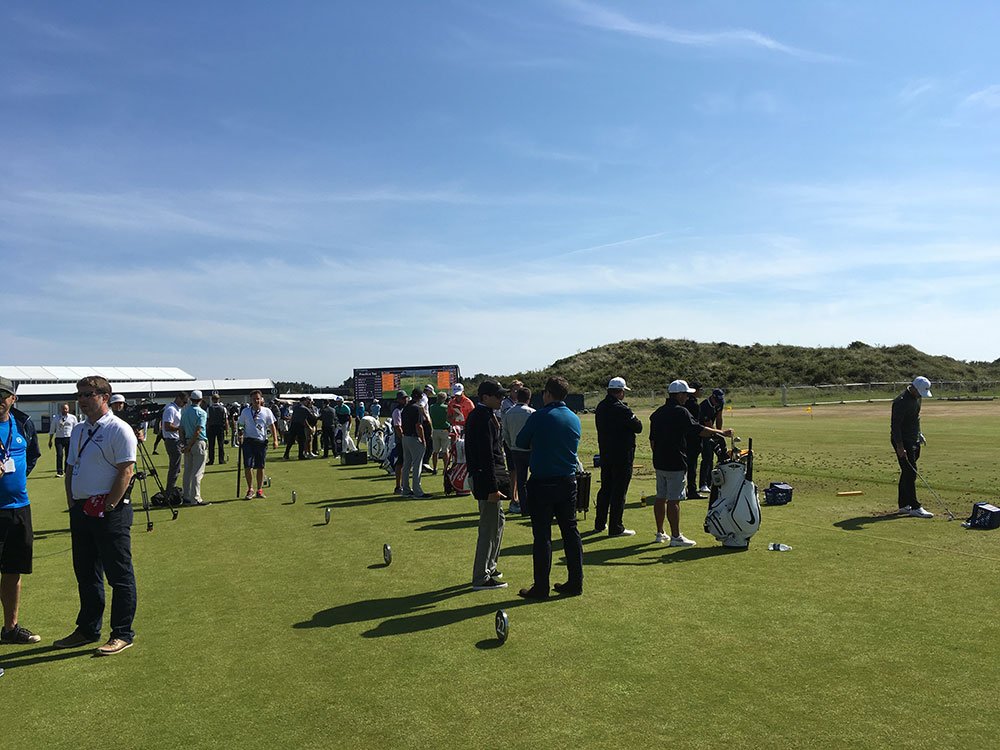 Day 5 came as a bit of a shock with the temperature dropping from +23֯ yesterday to somewhere around +15֯. It felt cold with the wind change adding another challenge. I spent the first part of the morning on the range watching the players with the early tee times all wrapped for wet and cold conditions going through their warm up routines. The variety of routines is interesting with some swinging two clubs, some swinging with a club in one hand and then the other and others just hitting pitch shots. Just shows there is not no fixed way to warm up. Just doing what suits and works best for individuals is the way to go – but warming up is a requirement for everyone whatever their playing standard. Then off to the Swing Zone again to work with interesting people from aged 6 to 70 and beginners to players with +1 handicaps. Another friend from my tour days turned up today and it must be 30 years since Lesley Copeman and I played on tour together. I also really enjoy meeting people whom I teach at home all up to watch the Open. I had time to watch some play in the worst of the weather conditions in the afternoon. The heavens opened and so a short break while the rain was really heavy. At one point this caused some of the greens to flood. Nevertheless Jordan Spieth put together a very impressive display and there was the bonus of Rory having a good round -all good for tomorrow. 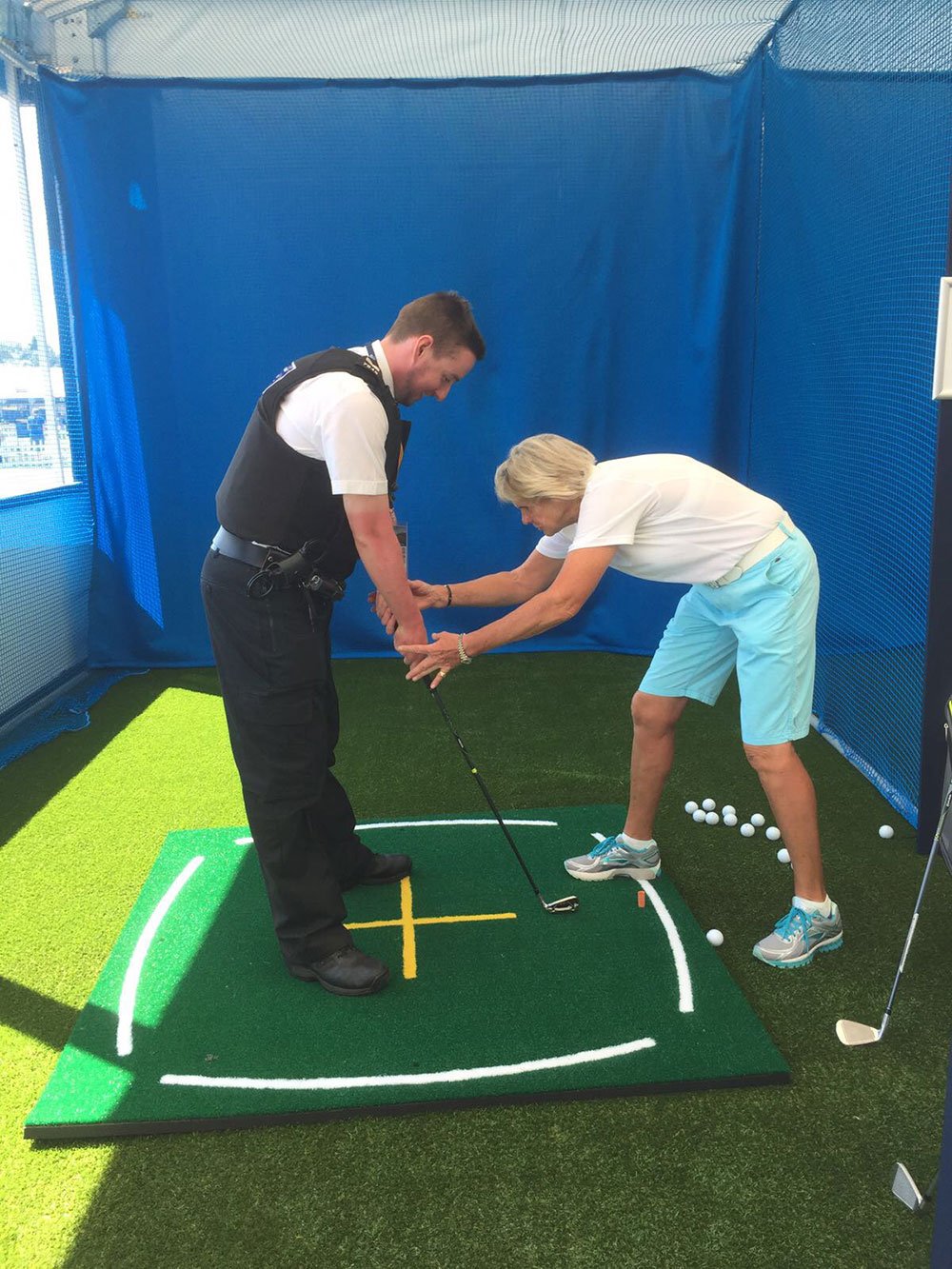 On day 6 at Birkdale the sun reappeared and the wind dropped. Very different to the previous day and perfect conditions for championship golf. It did not take long for birdies to start dropping in for many of the players. Brandon Grace set the early pace with a fantastic 62 which set the momentum for others who followed. The weather changed as the afternoon rolled on but the leader yesterday stuck to his game plan through the less favourable conditions and held off the challengers to hold the lead at the end of the day. I seemed to have more young people in the Swing Zone and ‘oh boy’ there is some golf talent from a girl aged 6 to a young boy who plays off 5. This compares with so many of the older people I have had the chance to help over the week. Some had no previous lessons or maybe just one or two. The day ended with all the Swing Zone guys staying around for an after work drink or two. 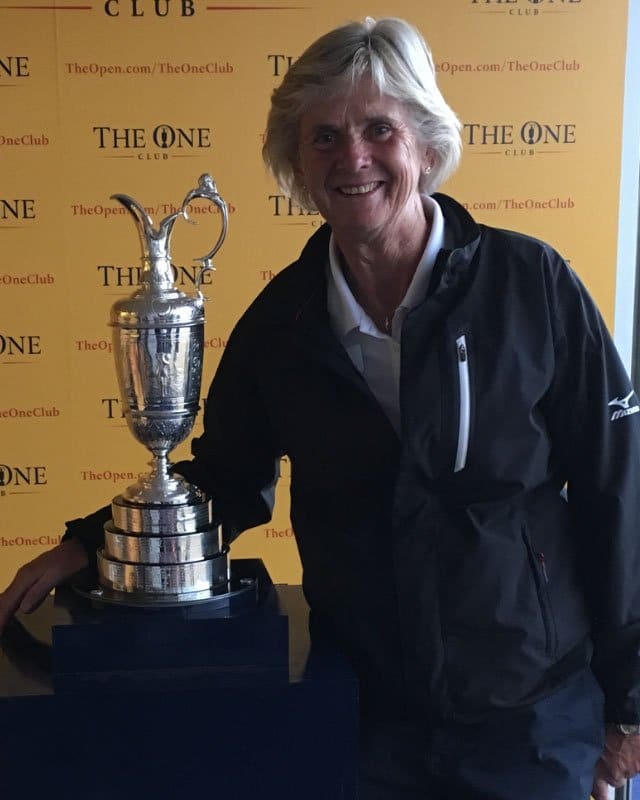 The final day at the Open, and the sun returned fully for the players. The big question is whether Jordan Spieth would hold off the challengers and go on to win? I was lucky enough to watch the players at the top of the leader board warm up – they do look good! As we know Jordan did go on to win despite a poor start and with the wild shot off the 13th tee. I have met him and he is a very nice young man and I am pleased he took the ‘Jug’. Two of the guys I had helped in Swing Zone on a previous day came back over for reminders about what they should be practicing. I also had a little girl who was just starting golf but full of enthusiasm and a boy who is playing off a 3 handicap. I have really enjoyed working in the PGA Swing Zone with a top bunch of pros. I did manage to get back to the 18th to watch Jordan Spieth win, so this proved to be a fantastic end to the week. Now looking forward to 2018.

Well I am now back from one of the best weeks of coaching a pro can have. I smile as I look back at all the people I coached, all the friends I met from my junior days and on the great golf I was able to watch. All this in the company of the pros I worked with over the 8 days at Birkdale. I have played on tour and appreciate that period of time and the challenges and, now I coach, I feel very lucky to be spending a large part of my life associated with the sport I love. I am proud to have been chosen to coach in the PGA Swing Zone and be part of the 3,000 sessions completed. There were over 36,000 under 25 year olds and some 235,000 people at the Open at reputedly over 505m watching on television around the world.

I do hope I get the chance of being selected to join the PGA Swing Zone in Scotland in 2018.

I give my thanks to Mr and Mrs Ken Weights for their generous hospitality, the PGA staff for looking after us all, the Mizuno guys on the tour truck, Alex thorn and my good friend Rae Webster.