Here we go with an early morning flight to Jerat in Spain for the group and for me! This is a new adventure to a new venue — Costa Ballena golf school in Spain. We arrived to be greeted with a wonderful clear blue sky and inviting sunshine. Checking the venue over I was very impressed with everything I saw. 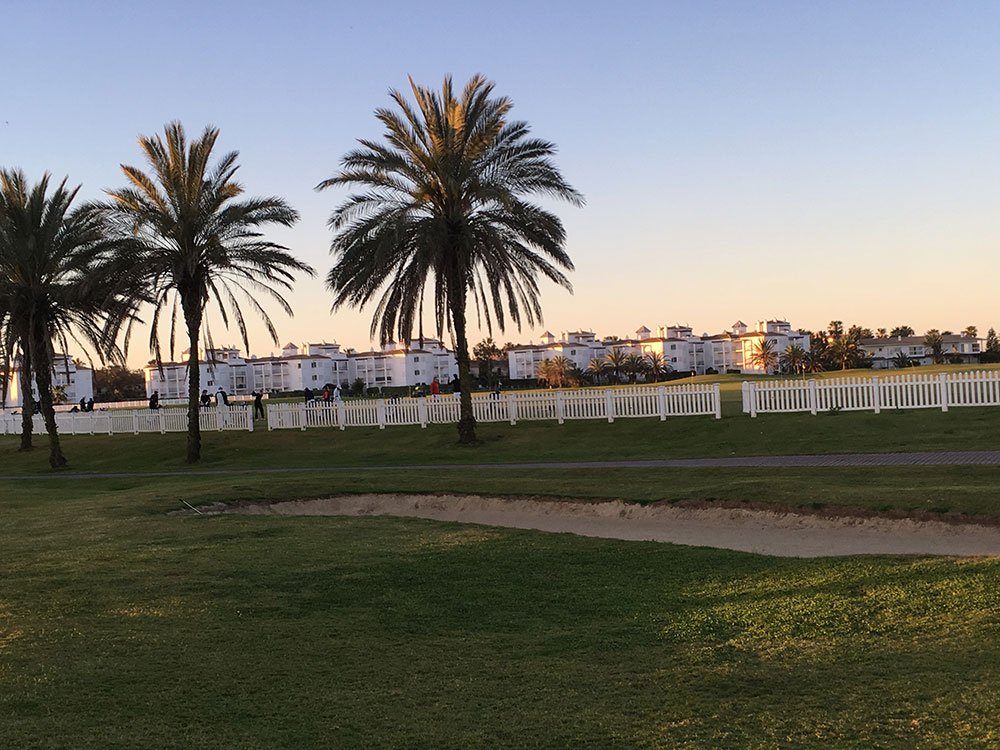 I started the coaching day with a short pitching clinic, making use of the fabulous short game area which is one of largest I have seen. The greens for pitching practice are of the highest quality and really encouraged everyone to concentrate on ball contact and distance control – no room for blaming the facilities for poor shots! Having warmed up nicely we moved over to the practice ground which like the pitching greens is one of the biggest I have ever experienced. At a guess it could cope with 100 players without becoming over crowded. We focussed on the importance of good balance and discussed an overview of the swing path and pace. We talked through the essentials of a good set up posture and aiming the face of the club at their selected target, as well as being sure to make contact with the ball at the bottom of the down swing, then hitting the ground after the ball. With the group putting these into practice I took the opportunity to video individuals as the starting point for the week. This is always useful in showing every ones progress over the week when we view the recording a few days later. Whilst it is important to practice good habits the sport is about actually playing and putting growing skills into practice. The course here was designed by Olazabal, has large bunkers, small sloping greens and lots of water hazards. Not an easy course but good fun, particularly in the great weather conditions we were lucky to experience. 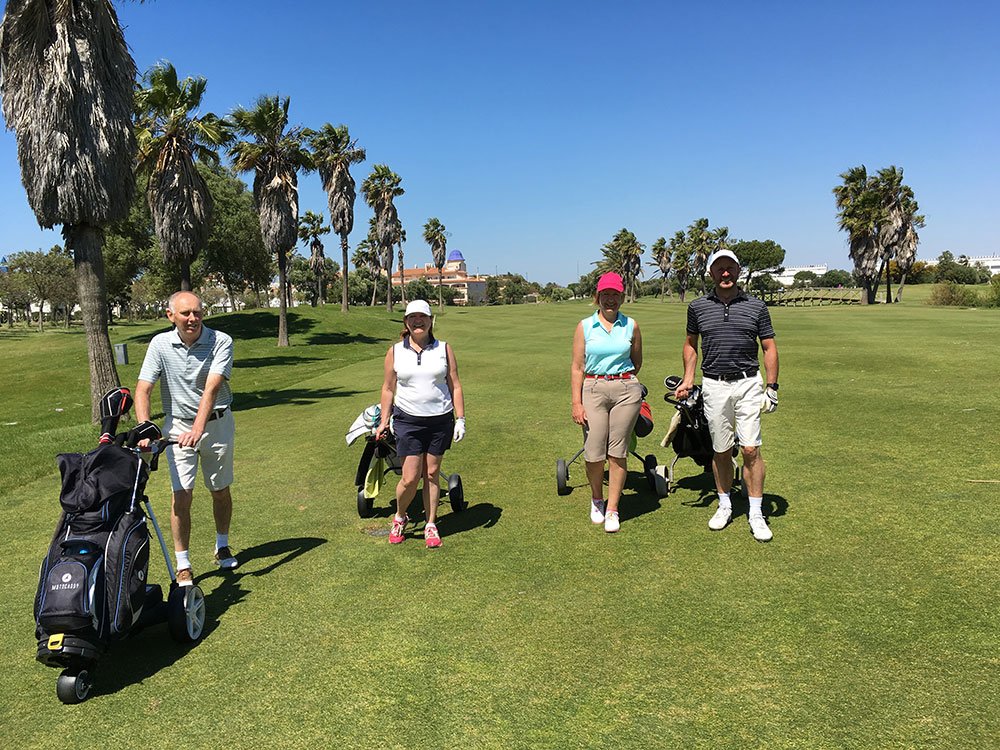 We started day 2 with two groups. The objective of this session was to introduce how to use different irons for pitch and run shots. First playing just off the green I got the groups to pitch with a 7 iron. They found this a bit strange until I explained the logic – using a 7 iron needs a 25/75 approach, landing the ball 25% of the distance to the hole so it runs out 75% of the way. Many would use a wedge which requires a 60/40 approach which requires a longer swing and a higher trajectory than a 7 iron and the risk of hitting the ball off target with unwelcome consequences. The 7 iron 25/75 shot is easier to control and much less likely to end up a wayward shot off course; it takes practice and judgement but gives another option in the bag and a good one , I think. We moved over to the range to get to grips with low 7 iron punch shots, which is a different version of the short 7 pitch shot we had been working on. When requirement is to hit 60 -90 yards to the green in very windy conditions it is important not to get the ball over 18 feet in the air as above this the ball is likely to be drifted off line , especially in a cross wind. I learned to play this shot as a kid because I played a lot on the coast with windy conditions. To make the shot work it is essential to keep hands in front of the ball (otherwise hands will flip the club face over at impact.) We also worked on tee shots including how high the ball should be teed up, with half the ball over the head of the club as it rests on the ground. The groups rotated practicing the different shots we had worked though. As is customary we played on the course after lunch. As usual it was good fun and great to see how the shot making had improved with everyone putting the morning coaching into practice.

Day 3 was a rest day and a hot one was promised. 10 of the group hired bikes and set off in search of wine tasting and lunch. I went for a run in the relative cool of the morning and after lunch had a great walk on the beach. 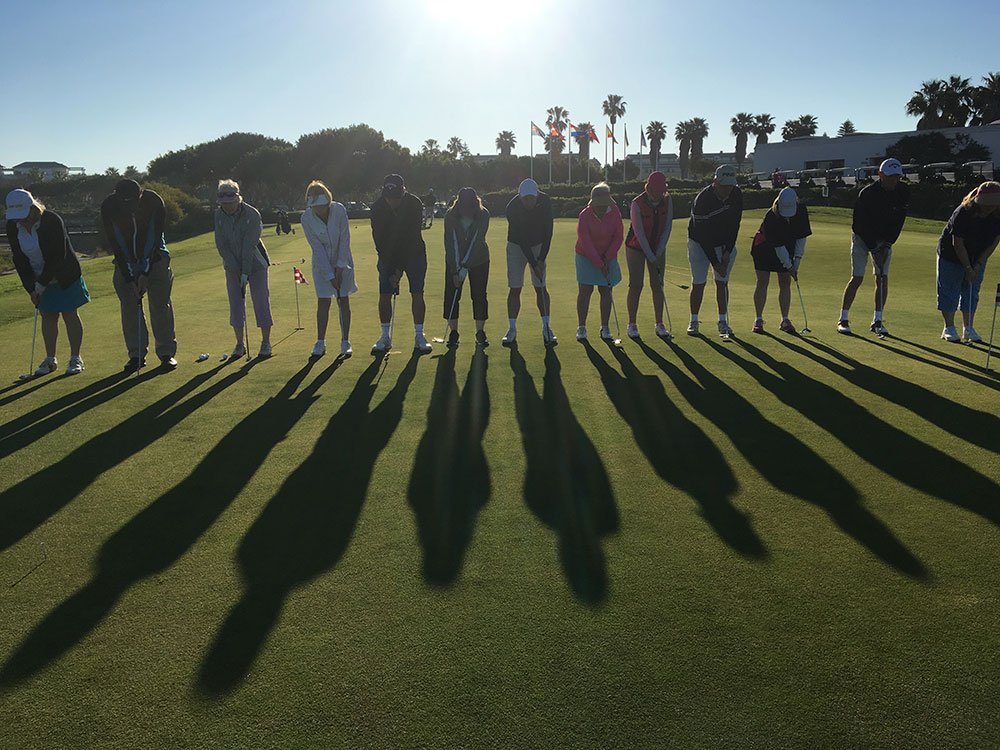 Resuming the coaching on day 4, I decided to split the school into 2 groups working alternately on pitching and bunker play. Like the rest of the complex the bunkers are enormous which adds to making this a fantastic venue for a coaching school. We worked through the 3 club angles to use depending on how deep the ball is lying in the sand. The practice starts by making a line in the sand at 90 degrees to the shoulders and hitting down with a full swing to contact the sand after the line. Many players are afraid that a full swing will hit the ball much too far. Whilst that is true if the ball is struck; the trick is to hit the sand about 2 inches behind the ball which is about where the practice line was drawn. Make full and solid follow through. It is a great coaching session that encourages a full swing and gaining the experience of the ball coming out of the sand and not flying off to the distance or dropping back into the bunker. This shot requires a good balance at the end of the swing, hence the need to get feet planted firmly.

I dedicated day 5 to putting. The concentrated coaching on pitching, bunker play and putting is aimed at reducing playing scores, so I gave these elements a lot of attention. Whilst putting can often include a personal style and judgement there are some principles that must be adhered to.

1 Remaining solidly still: 2 keeping the head very still: 3 Keeping eyes still and focussed on the ball: Staying over the ball and make the stroke very smooth: Listening for the ball dropping in the hole: There is a tendency to look up too soon, so always concentrate eyes on where the ball was. I set up drills not only concentrating on the principle but achieving distance control. The greens here are very consistent but sadly it is not always the case at home and pace can vary from green to green, so much is learned from experience. The wind got up and we moved to the range and used the conditions to work through the techniques of driving in strong winds. So we looked at punched shots and how to control ball flight. This is a good session as most players feel they need to hit the ball further. We went over teeing up again to ensure that half of the ball is above the club with the ball inside the front foot and under the arm pit are good guides to use. The aim is to sweep the ball off the tee ensuring a full follow through with the torso facing the target at the end of the swing. After lunch we went out on the course. It was not an easy playing day as the wind continued to blow. However this provided the ideal opportunity to play the low shots we had worked on; this was something of a bonus. 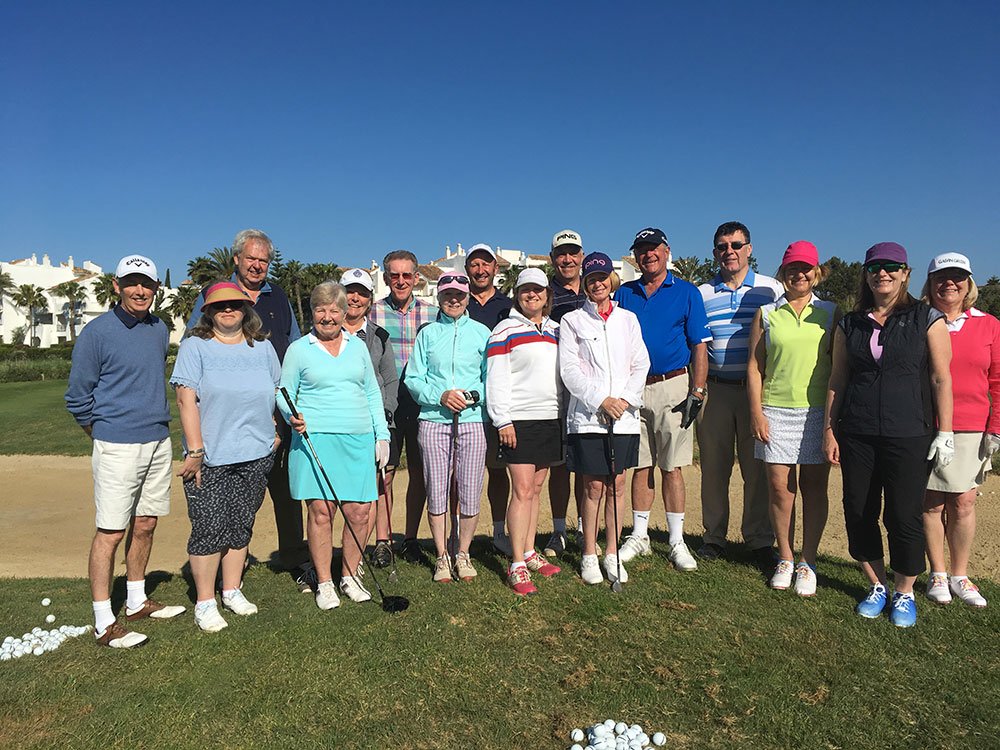 We came to our last day all too soon; the group were a tad tired as they had worked so hard throughout the week. I summarised everything we had covered during the coaching sessions. We had a very good question and answer session; there were some really good ones from the group. Following this we went out on the course for a competition on the last day. It is great for me to see not only the improvement but the determination to keep trying to put into practice the techniques practised over the week. The winners were David and Wendy in the individual competition and Liz and David in the secret pairs competition..

It was a good week at this new venue and much fun was had. I thank everyone for the hard work put in and for the humour. This made it an enjoyable week for me; thank you guys you were great and I appreciate your time . Keep up the dedication and hard work.